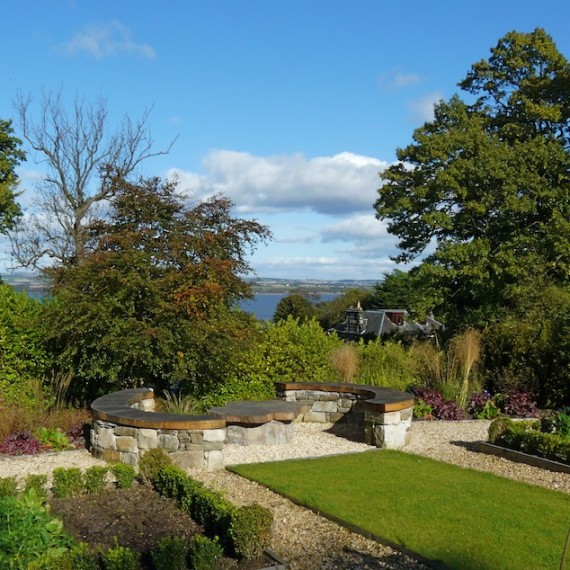 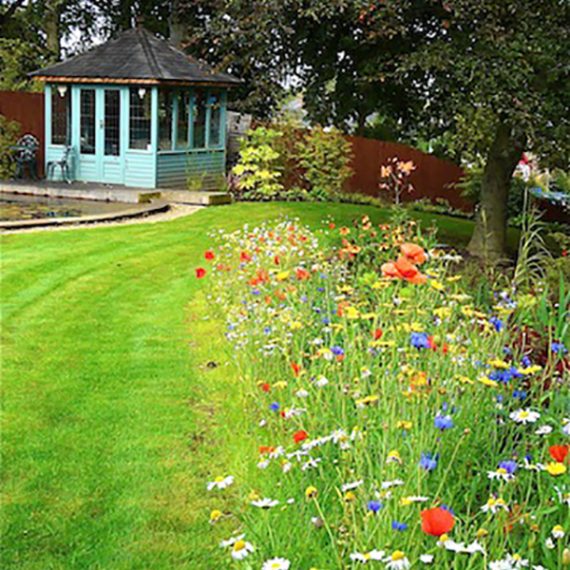 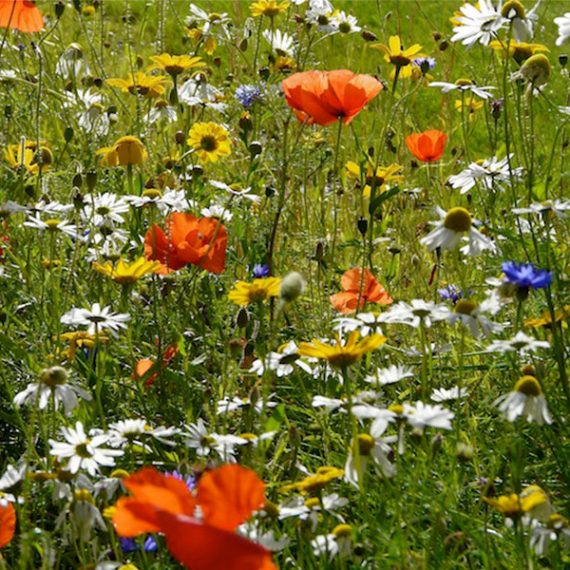 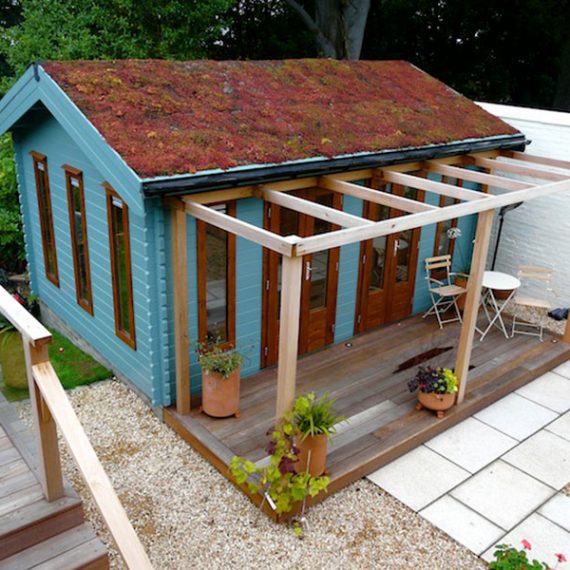 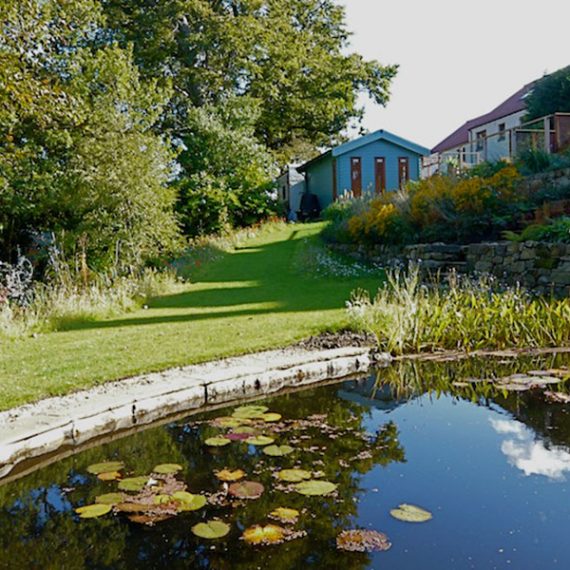 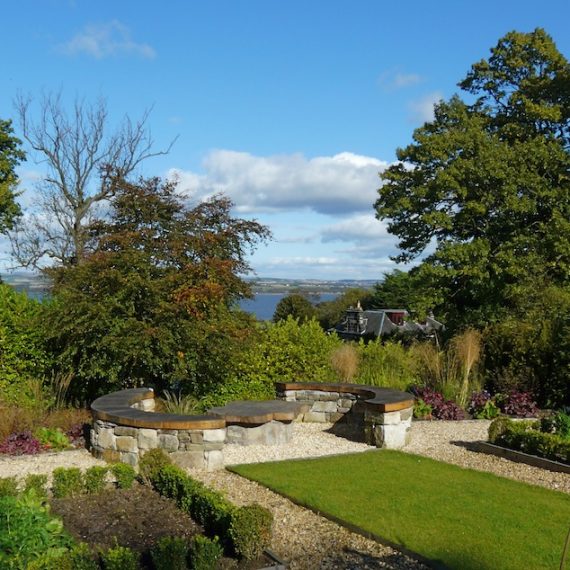 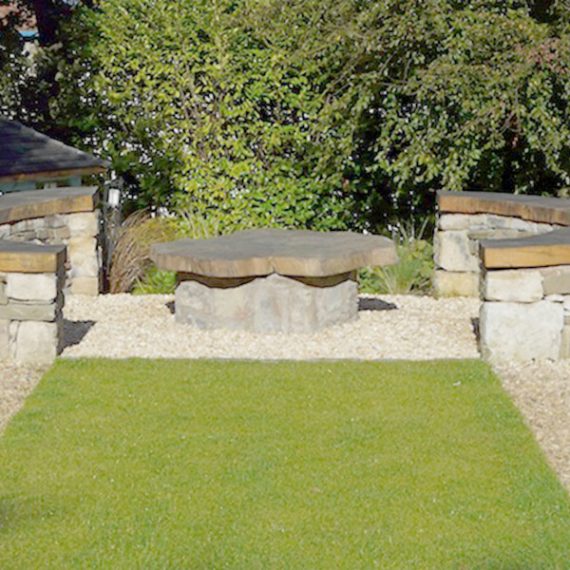 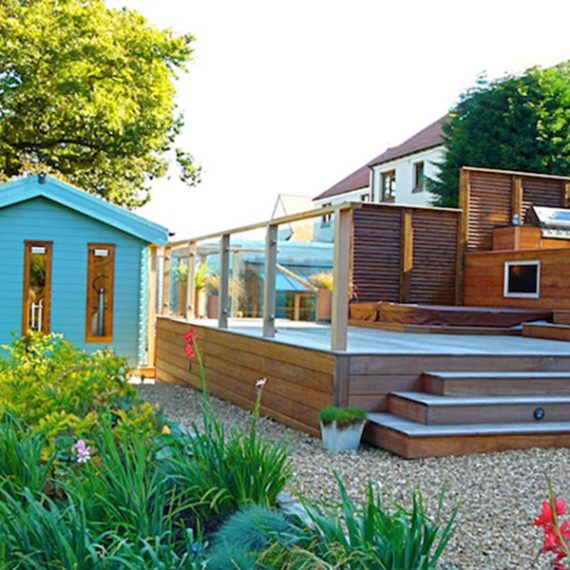 This rear garden had previously been the site of a steep, winding, gravel driveway which had been relocated to the front of the Victorian sandstone villa. This left the rear garden requiring a complete redesign. An existing deck at the back door was well positioned for the breathtaking views across the Firth of Forth to Fife but was badly constructed. To the side of the deck, a series of outbuildings were in a state of collapse. The clients were keen to mix the traditional with the contemporary and, apart from retaining a mature beech tree, were otherwise completely open to suggestions as the site was so steep, badly draining and uninspiring.

I started by siting a pond at the bend in the driveway where water would naturally gather. Behind this I placed a traditional painted summerhouse with cedar shingle roof to act as a strong focal point to be viewed from around the garden. Water lilies, marginal planting and mature Acer Palmatums provide a soft frame for the pond and summerhouse. Above the pond at the top of a steep slope is a circular dry stone seating area with fire pit in the centre.

A mown lawn path lined with wildflowers replaces part of the old driveway and winds its way underneath the mature beech, past the pond and up towards the deck. Dry stone walls help to partially terrace the steep slopes and drainage issues were dealt with before planting up with a mixture of grasses, ferns and herbaceous plants.

At the top of the garden the deck, with sunken hot tub, was redesigned with glass balustrades opening up the view across the garden and across the river to Fife. Smooth yellow balau boards replace the old deck along with an outdoor kitchen area with integrated barbecue and black granite work-surface. The combined effect of this and the yellow granite slabs is a crisp contemporary look against the traditional sandstone of the house.

In the side garden a south-facing gym replaces the dilapidated outbuildings and is painted the same colour as the summerhouse. Viewed from the deck and house above, a sedum roof helps to blend the building with the rest of the garden whilst keeping the gym and its occupants cool in summer. Outside, a verandah-style deck with pergola and grape vines provides a warm area sheltered from the prevailing winds and from neighbouring windows. Raised beds are again constructed using dry stone to tie the side garden with the rest of the rear garden.