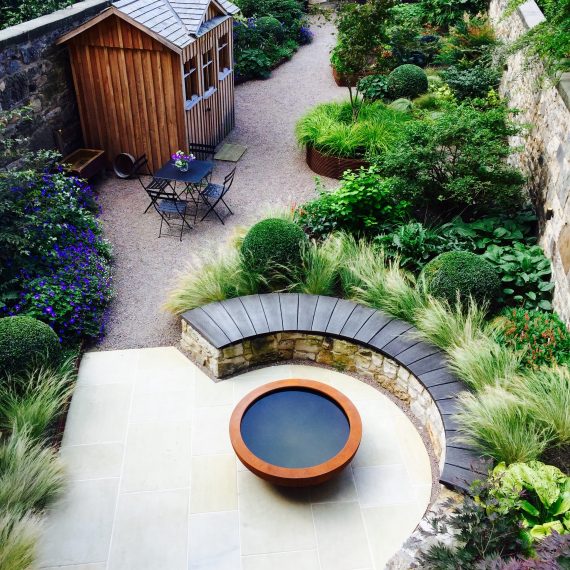 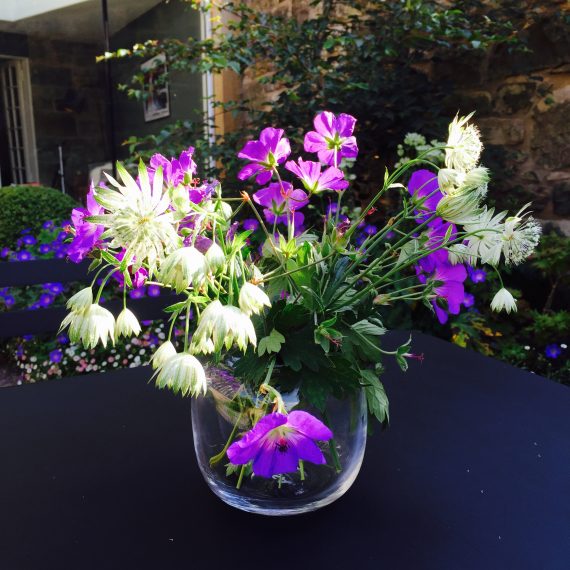 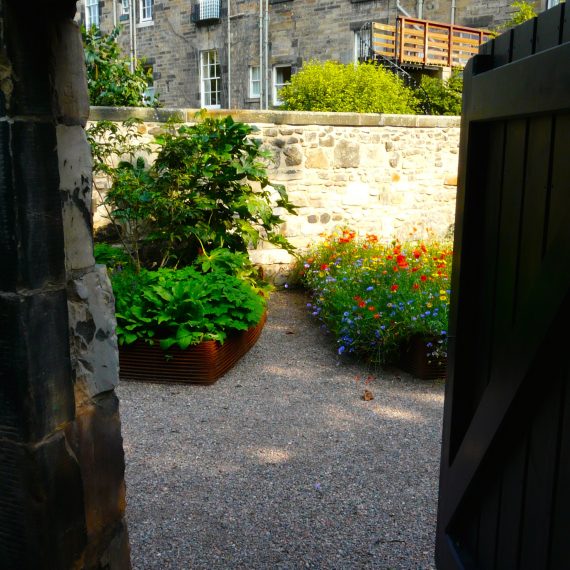 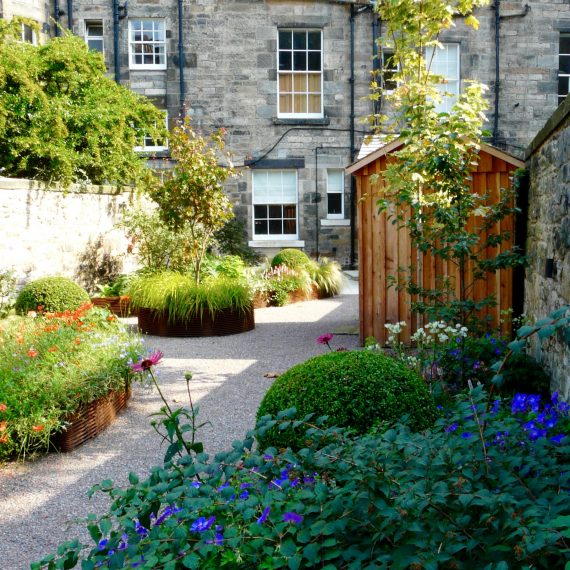 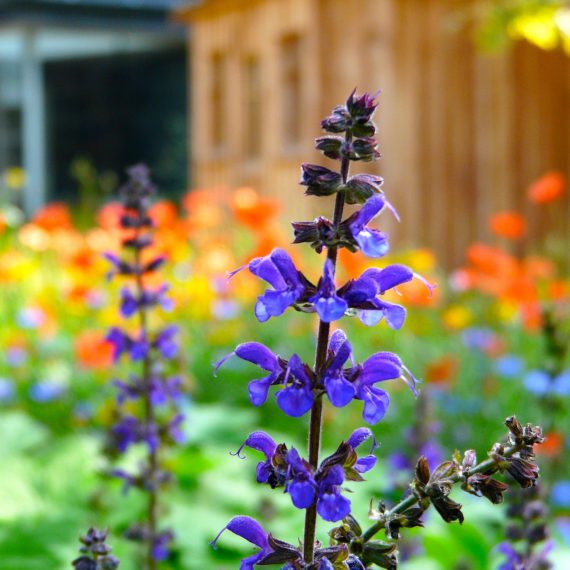 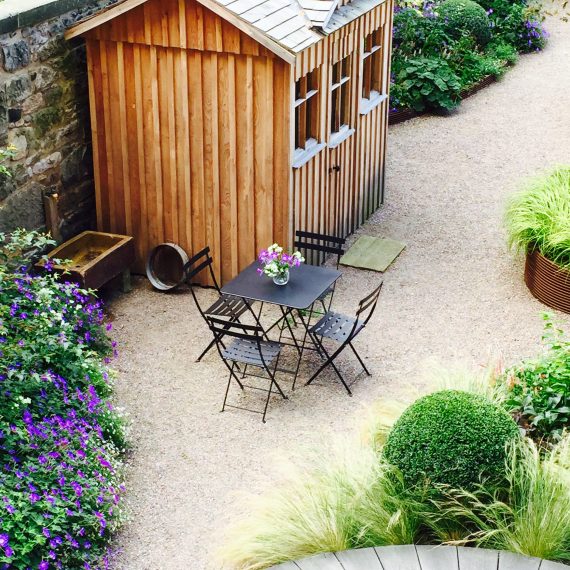 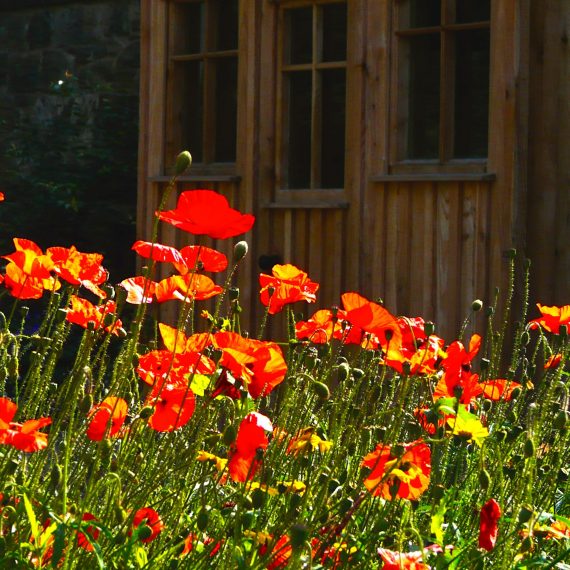 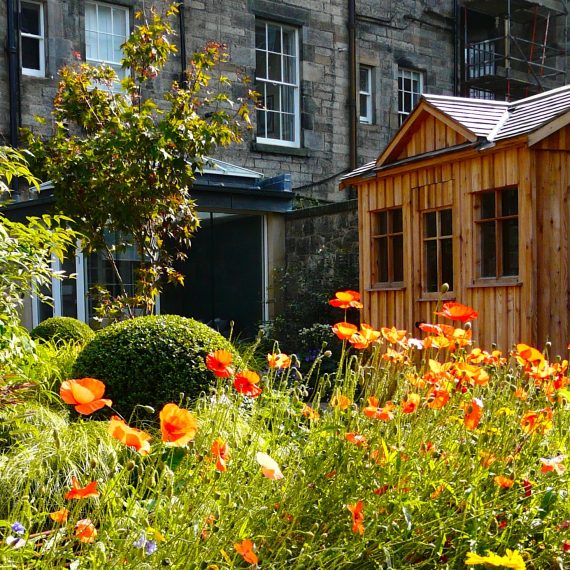 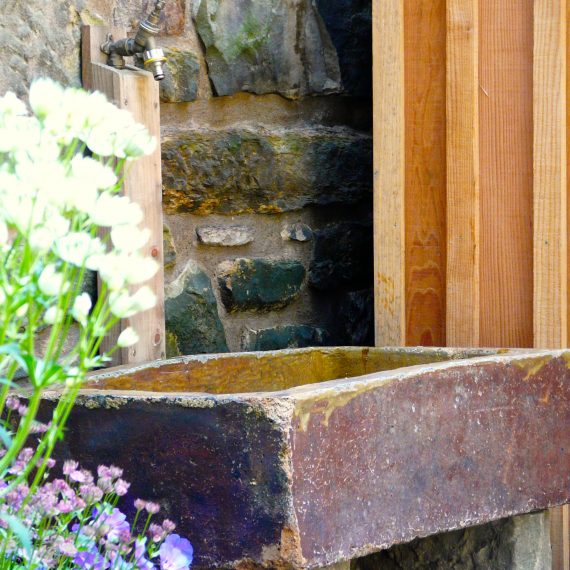 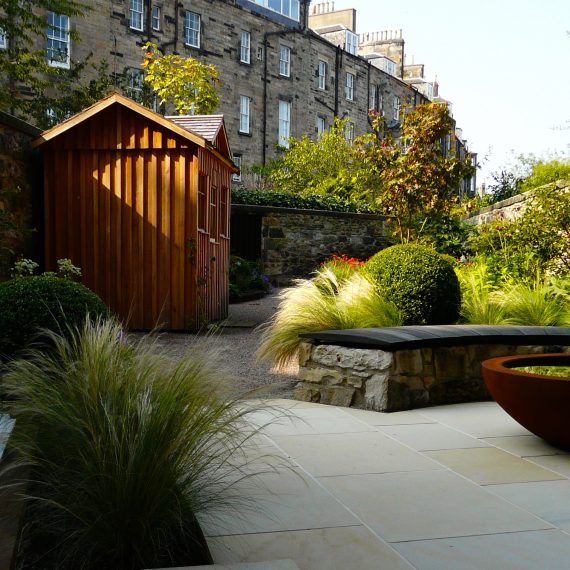 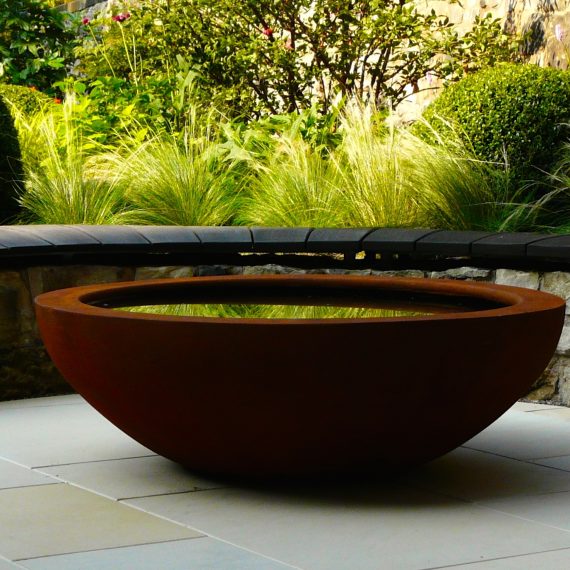 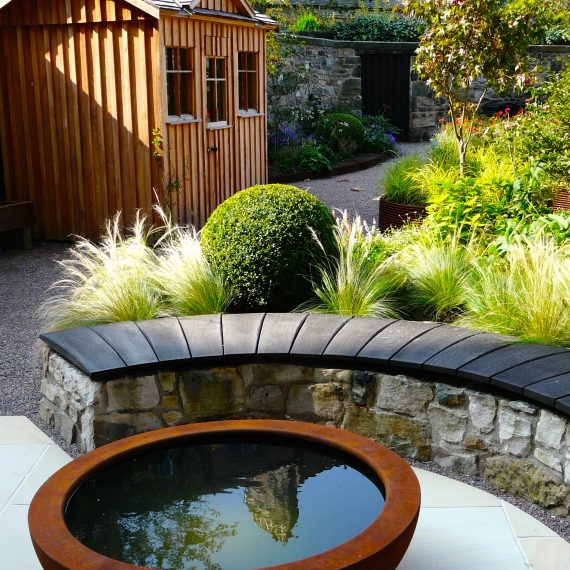 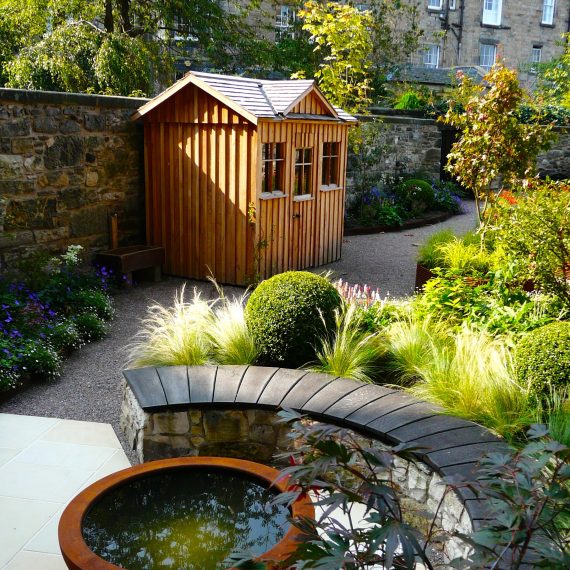 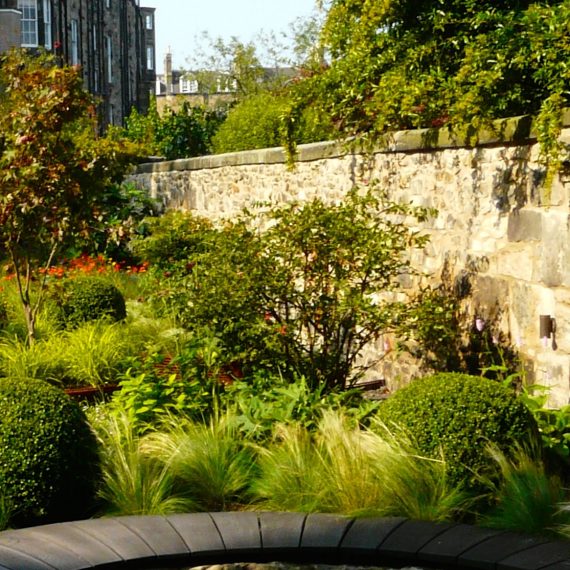 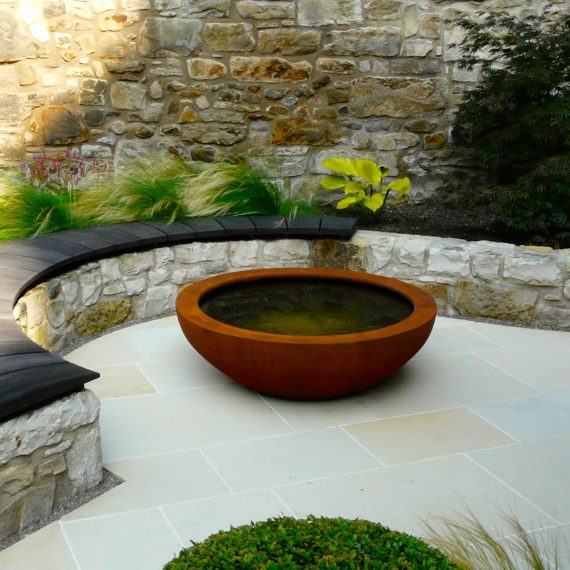 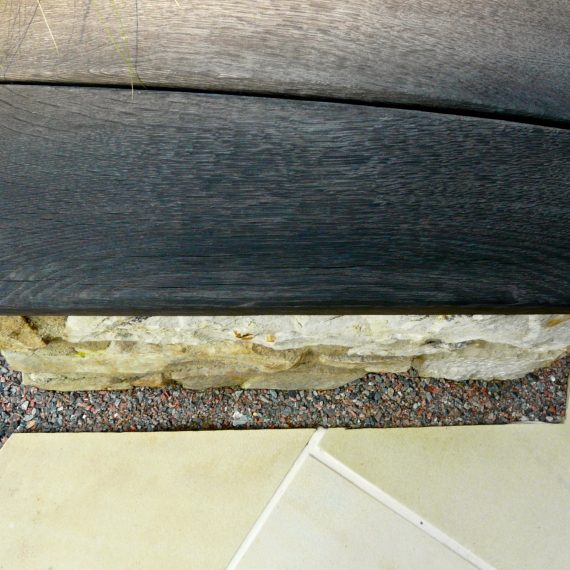 This garden won a Principal BALI award in 2014 for Water Gems and was featured in the May 2016 edition of The English Garden with an article by Agnes Stevenson and photographs by Andrea Jones:

‘Tucked behind one of the most elegant terraces in Edinburgh is a garden that has been designed to be inviting, regardless of time of day or season of the year.  Its owners were clear they wanted somewhere that would draw them outside all year round and at any hour.  “Late at night they like to switch on the garden lights and sit around the lily bowl,” says designer Carolyn Grohmann who was commissioned to turn this awkwardly shaped space into proper garden with year-round colour and space for vegetables to grow.

The garden is long and narrow and it sits at a sharp angle to the house, finishing in a point at the far end.  This, however, was less of a problem than the rubble that had accumulated while the house was being renovated and the fact that neighbouring householders had planted the edges of the narrow lane – which provides the only access to the garden – with a profusion of flowers.

“We did finally manage to manoeuvre a mini digger onto the site without mishap,” she says.  Rather than attempt to disguise the boundaries, Carolyn based her design on a sectional slice of a flower, with petal shaped beds radiating from the terrace.  On the terrace she placed a large lily bowl, its surface a perfect reflecting mirror, its exterior rusted to a warm shade of ochre, and she surrounded it with a low wall topped with scorched oak to create a curved seating area.

Deeper into the garden, raised beds were made from woven rebar, the reinforcing rods used in construction and road building.  With its resemblance to willow, woven rebar gives the appearance of the natural material but has the advantage of longevity.  “Raised beds need to be big enough not to dry out quickly, so here they are substantial and packed with plants, which helps to keep down weeds and reduces evaporation from the soil surface,” says Carolyn.

The planting is gloriously romantic, heady palette of perennials such as Primula Japonica’Apple Blossom’, Paeonia ‘Claire de Lune’ interspersed with grasses including Stipa Tenuissima and Carex elata Aurea above which fine leaved Acer Palmatum Osakazuki, Cercidyphyllum Japonica and other small trees of delicate habit cast only a tracery of shade.

Growing plants in the substantial beds create useful height; when the rush of new growth gets going in spring, the garden quickly disappears behind a lacey screen of flowers and foliage, making a trip to the beehive-shaped compost bins feels like a journey of discovery.

These bins and the exterior door that leads to the lane have been painted black to tone with the scorched oak.  The garden furniture, from Fermob, is also black, which brings some cohesion to the design.

When she surveyed the garden, Carolyn was struck by the beauty of the high walls that surround it, so she had these repointed, recessing the sand-coloured mortar so that each stone block stands slightly proud.  “In Scotland, because because of the long hours of summer daylight, garden lighting isn’t always essential but here I’ve used subtle up-lighters to bring out the beauty of the walls.”

This is another reason why she hasn’t also smothered the walls in climbers, preferring instead to use them as a decorative foil for sell-spaced trees and shrubs.  The end result is a delicate balance between contemporary design and traditional garden elements that looks good in every season and in all weathers.  It has, in all ways, achieved a sense of harmony.  Carolynn says, “The clients love the garden and relish spending time in it but they also appreciate the fact that, despite the coplxitieies of access, we managed to keep all of their neighbours happy.”