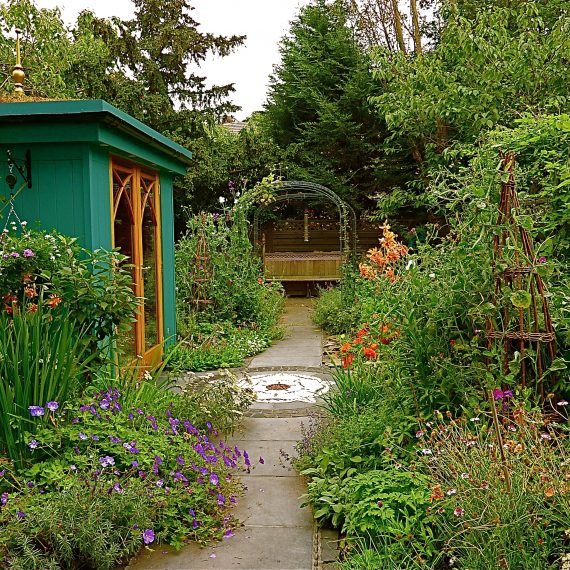 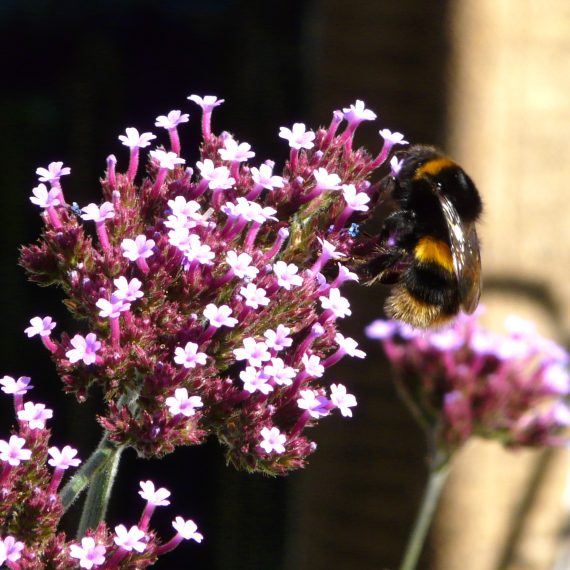 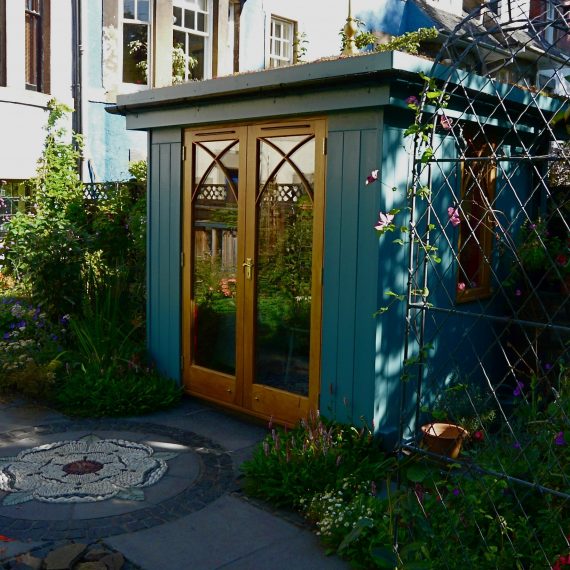 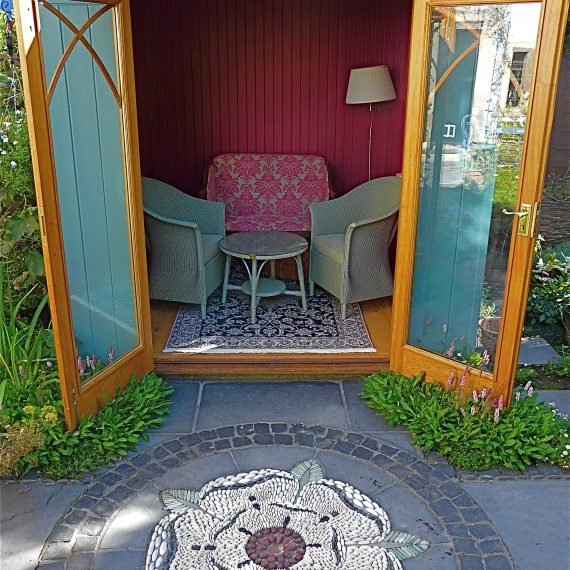 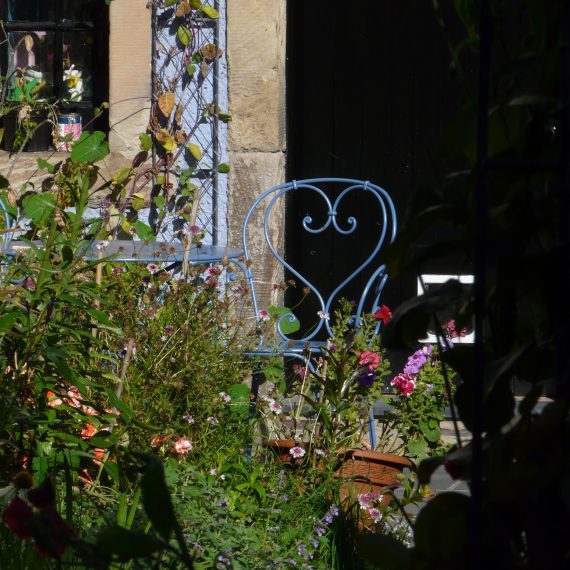 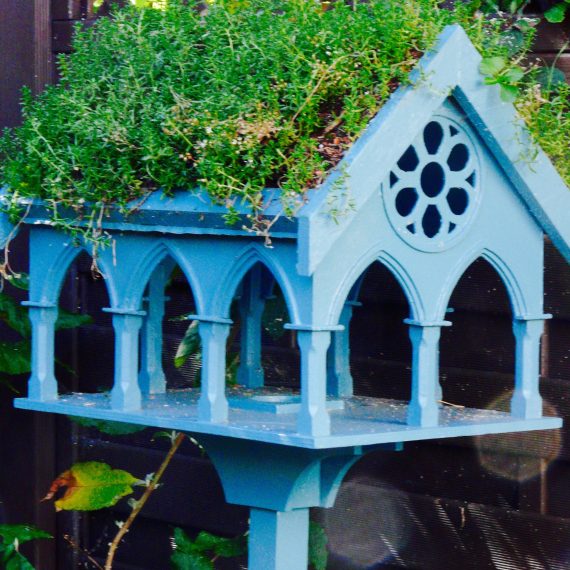 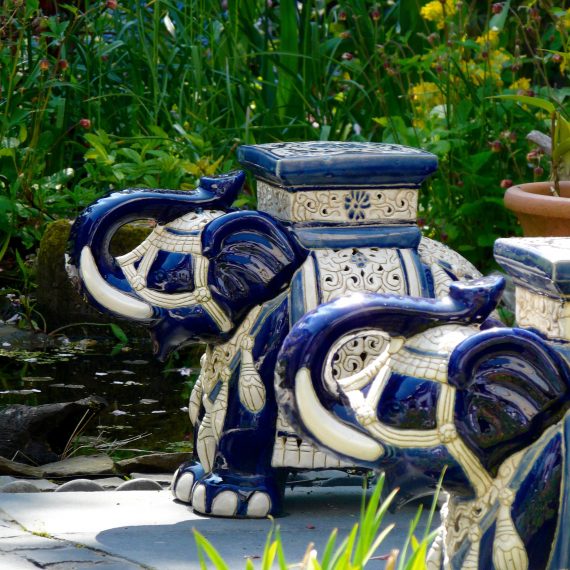 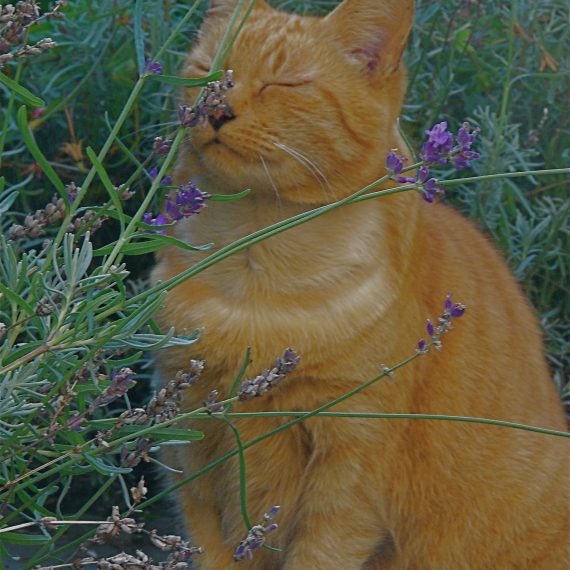 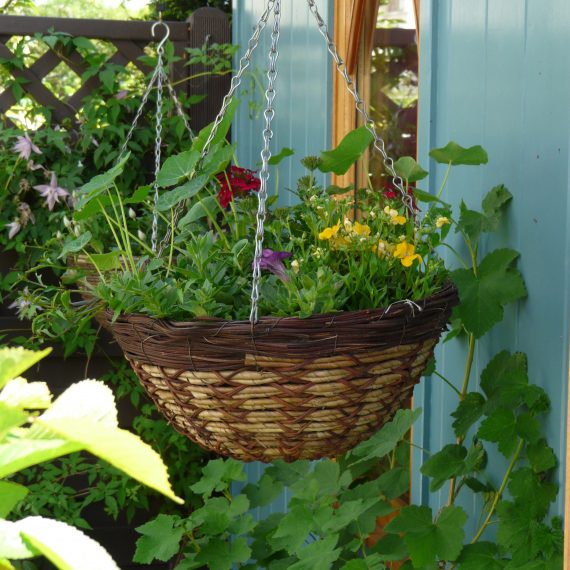 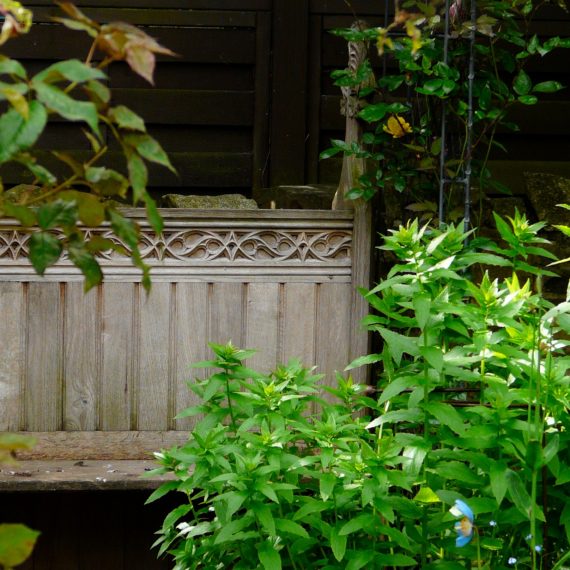 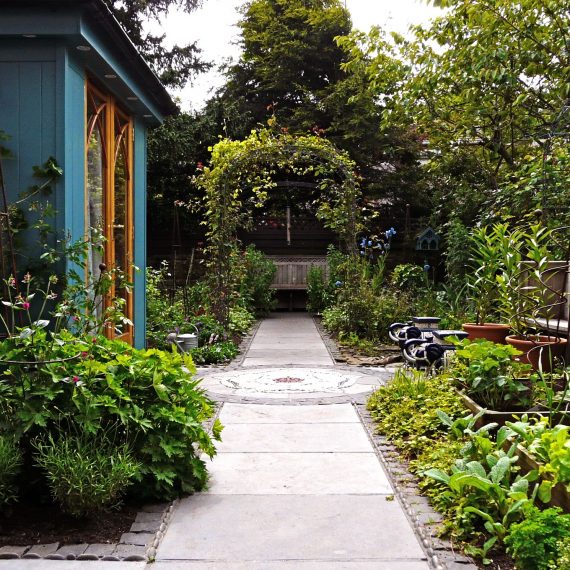 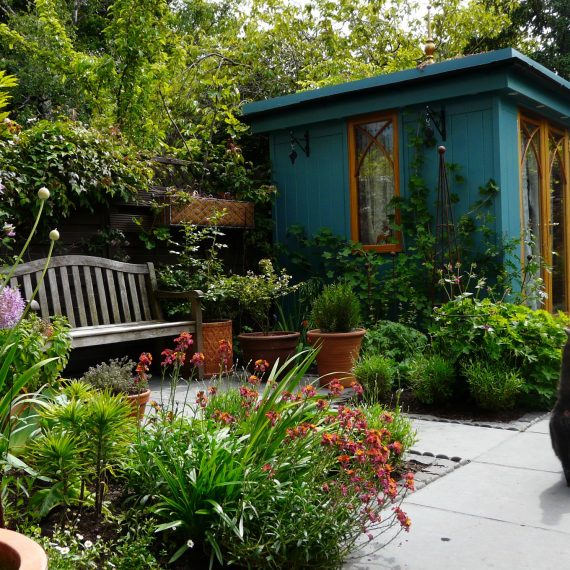 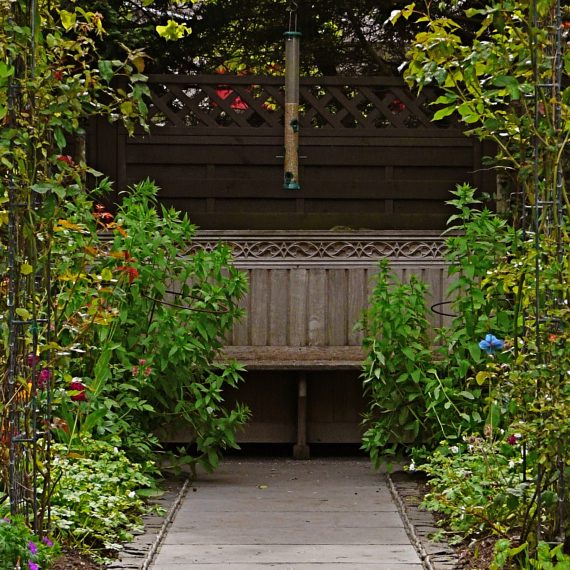 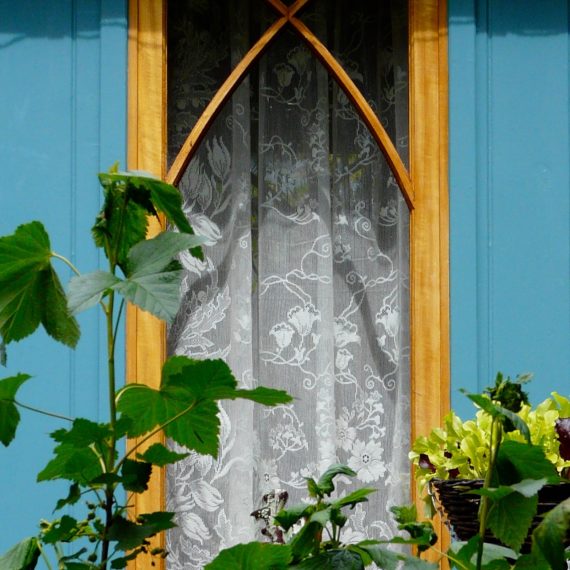 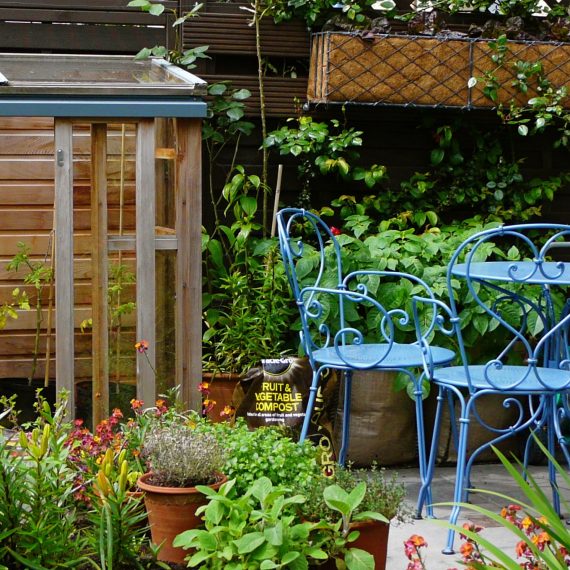 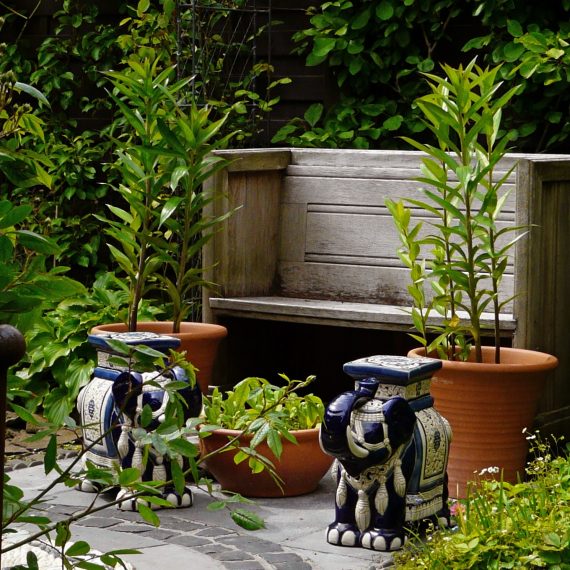 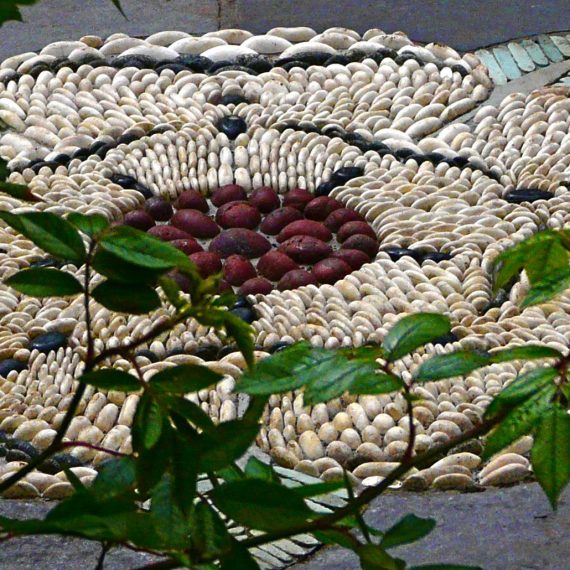 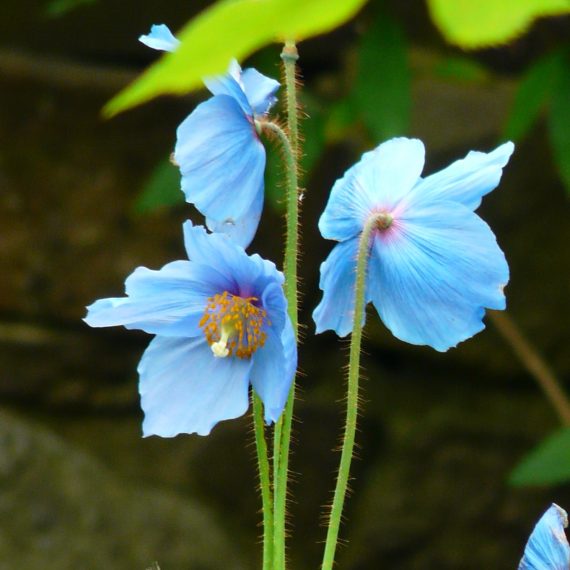 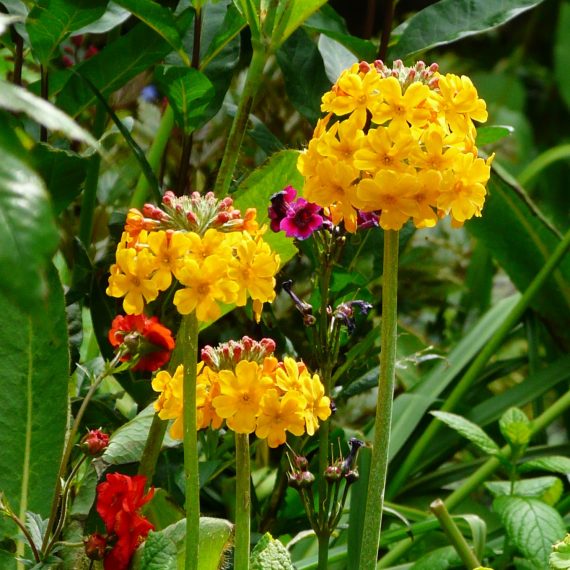 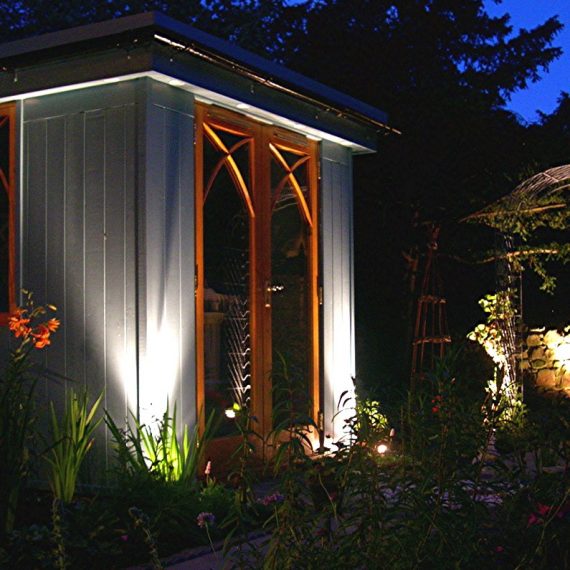 In August 2011 Kate’s garden was featured in the Sunday Times home and garden supplement.  She very kindly insisted that her garden designer be at her side for the photos (by Andrea Jones) and interview.  Here is the article.

Were she to start over again, the novelist Kate Atkinson, 59, says she would have liked to work at GCHQ. “That would have been my ideal job,” she says, as we sit in the summerhouse of her suburban back garden in Edinburgh, birds twittering in the trees of the surrounding gardens.

It is hard to believe that such a chatty woman, whose conversation is punctuated with peals of laughter, would be capable of keeping shtoom, but she reassures me: “I would love to lead that secret kind of life.”

Atkinson’s fans – and there are plenty of them – will be delighted that there is one less spook in the service. Earlier this year she was awarded an MBE for services to literature, and her latest novel. Started Early, Took My Dog has sold more than 250,000 paperback copies in Britain since January. It is the fourth outing for Jackson Brodie, the gruff but sexy detective from his creator’s native Yorkshire, who recently seduced television audiences in the shape of Jason Isaacs in the BBC’s adaption of Case Histories. There’s a grisly murder at its centre, but sill many moments when you laugh out loud at her vivid characters and crackling prose.

Its title is borrowed from the 19th century American poet Emily Dickinson. Dickinson may have started early, writing her first known poem at the age of 20, but Atkinson took rather longer to get going with her present career. Having failed a doctorate on the American short story at viva (it obviously still niggles), she began writing her own in 1981, and her first novel, Behind the Scenes at the Museum, was published in 1995. It won the Whitbread award, beating Salman Rushdie and Martin Amis, and she has never looked back.

She bought the three-bedroom Arts and Crafts house to the south of the city in 1996, to be near her family. Having married twice (she now lives alone), she has two grown-up daughters and is a glamorous grandmother to two.

I ask Atkinson how much she does in the way of gardening. “As little as possible,” she says. “I am a potterer, and the whole idea of the garden is that it freed me up. When you work at home, it is quite oppressive, as you are always in the house. I wanted somewhere I could shut the door and come and not fret. I never feel guilty when I am in the garden.”

Until quite recently, this wasn’t the case. She could hardly bear to go outside to the lawn, patio and borders that used to be there. “Why do I have all these features I no longer like?” I thought. “It is like having an extra room I don’t get round to tidying.”

By 2007, she was so fed up, she got in touch with Carolyn Grohmann, an Edinburgh-based garden designer. Grohmann came round for a site inspection, looked at the back door and declared that was just the place for a rose arch. Atkinson who had recently visited the gardens designed by Vita Sackville-West at at Sissinghurst Castle in Kent, and was keen to capture some of their magic, was impressed. “I thought; ‘Be still my beating heart – this is a woman with romance in her soul,’ ” she says.

Atkinson has insisted that Grohmann join us for the interview and refuses to be photographed without her, generously giving credit where it is due. Grohmann has brought along the list she asked her client to draw up of things she dreamt of having in the garden, and reads it out, with much merriment from both women. “Romantic and inviting in all weathers. Not anally retentive, but tidy; a proper garden; girly stuff [such as] roses, sweet peas and clematis; an edible garden; paths; herbaceous borders; tunnels, arches; NO IVY.”

Atkinson got what she wanted in this most “girly” of gardens, with stone paths (no grass, so no need to heave out a heavy lawnmower) and small borders stuffed to the gunwales with flowers, scrambling up supports and bringing the English cottage garden to suburban Edinburgh.

Along the brown painted fence are espaliered fruit trees, and even in such a small space (23ft by 69ft) she manages to grow gooseberries, black- and red-currants, wild strawberries, raspberries, blueberries and rhubarb – while not exactly stuffing her deep freeze with excess, she gets enough to fill a breakfast bowl. Lettuces grow in window boxes and climbing French beans provide flowers as well as fodder: not an inch of earth is wasted.

A small pond is known as the frog palace, although at present it only holds one little emperor, but Atkinson has high hopes for a growing population. “I’m looking forward to those long summer nights we never have, full of them croaking away.”

Once the herbaceous plants have died back in autumn, there are many bare months. A large pebble mosaic in front of the summerhouse, in the shape of the white rose of York, does something to alleviate this, and is designed to be seen from the three storeys within the house. However, “it is a very dead winter garden”, says Atkinson. Come spring, things start to move again. “We put in more narcissi and daffodils than any human being has ever put into a garden. It is an almost spiritual thing when a garden comes back to life. You think, ‘Oh yes, it is all right. Everything does renew. Death is not the end.’”

Atkinson could spare herself the gloomy thoughts her wintry garden incurs if she could get over her aversion to shrubs, which she considers suggest a “bourgeois sensibility” and therefore should not be included. “I do not ‘aspire to a shrubbery’,” she says, quoting Jane Austen.

When I suggest box balls, I’m told they smell awful. What about lonicera? Grohmann says: “’Baggesen’s Gold?’ That would be the end of a nice relationship.” (I was thinking of the inoffensive species L nitida.)

Grohmann did try to introduce some pyracantha, along with berries, but this went down like a slice of cold haggis. It might have to be up to Janet Thomas, who comes in once a week to tend the garden, to sneak in something.

Brodie is off the scene for the moment and Atkinson is 60,000 words into her next novel. Although she tell me about it, I am later banned from spilling the beans: it does necessitate a fair amount of background reading, though, so she sits in the new sedum-roofed gothic-style summer house, equipped with a radiator for damp, chilly days. “I wanted something to get me into the garden in winter,” says Atkinson.

Three years on from the initial design, “as you can see, Carolyn is still here”, says Atkinson. “It is partly because it is her baby and I think she wants to exercise some control, in case I go mad and do terrible things.” The garden murderer: sounds like one for Brodie.

Once the garden was complete, I asked Kate for her verdict and she wrote this.

What I wanted was Le Petit Trianon in a small back suburban Edinburgh garden. Failing Le Petit Trianon I was prepared to settle for Sissinghurst. Carolyn treated neither of these desires as ridiculous – the mark of someone who understands a good relationship between client and designer! (I think secretly she also wanted to recreate Sissinghurst in a small suburban Edinburgh back garden.) In reality my brief was simple, a pretty garden that would tempt me outside even on the dankest Edinburgh day, a garden that would always seem interesting and lift the spirits. I’m pleased to say that I got all of this. What I didn’t contemplate – and what has been one of the great charms of this garden – is that it would continue to evolve, not just in its growing seasons but in the way that I use and enjoy it. So next year le Petit Trianon…