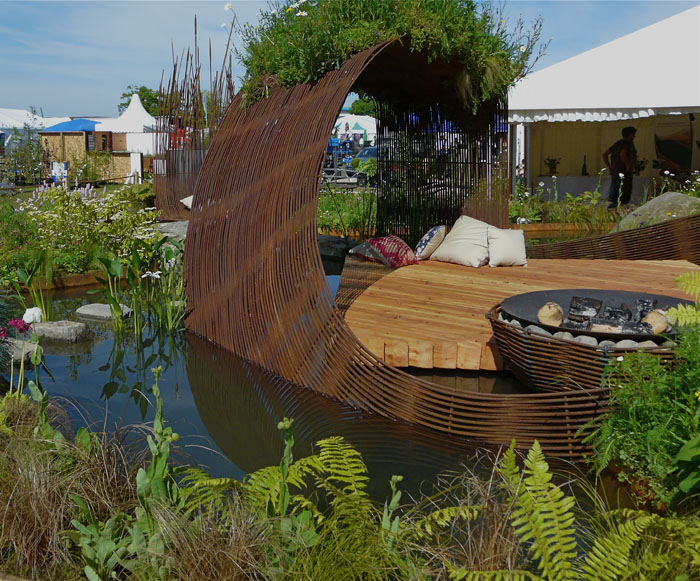 Posted at 16:19h in Awards, News, Press by SecretGardensDesign
Share

The Reinforcing Nature Show Garden sponsored by Brewin Dolphin struck gold at Gardening Scotland in 2010.  It scooped a gold medal but was also named Best Show Garden with a display which, according to RHS judge Lesley Watson, would have looked perfectly at home at Chelsea.  BALI Grand Award winners, Water Gems, designed and built the show-stopping garden.  They teamed up with garden designer, Carolyn Grohmann of Secret Gardens, for her creative planting skills.  Together they produced a garden which left visitors and exhibitors to Gardening Scotland breathless.

The sculptural centre-piece of woven reinforcing bars (Rebar) swooped and flowed through clouds of wildflowers and tranquil water creating a garden which was both relaxing and dreamy.  Luxurious curves, beautiful reflections and stunning planting combinations made this a garden which was instantly appealing.  The central larch deck and wildflower roof offered to cocoon, protect and entrance.  A generous fire pit and comforting pillows beckoned at the centre of this peaceful haven leaving the visitor with visions of late summer evenings spent in a spell-binding setting.

Jim Jermyn, who organises Gardening Scotland, said of the garden, ‘As Gardening Scotland passes its eleventh year as Scotlands premier Gardening Show we have been privileged to host one of the finest and most adventurous of show gardens ever seen at Ingliston. Combining a highly contemporary design with traditional planting, I believe the Water Gems display will have raised the benchmark of Show Gardens to an entirely new level. A Gold Medal garden of outstanding quality.’

Sam Lowndes of Water Gems formulated the intricate and sensitive design of the garden last autumn.  It then took five months to prepare the four and a half tonne Rebar structure which had to be craned onto an articulated lorry and escorted to the showground by police outriders.  Following on from our success at BALI, we wanted to showcase our work for our home audience here in Scotland , said Nick Benge of Water Gems.  We are thrilled by the response to the show garden.

The use of a biodiverse wildflower matting in the garden was complimented by drifts of Stipa tenuifolia, Astrantia major Ruby, Ranunculus aconitum Pleniflorus and Geranium sylvaticum Mayflower.  Rodgersia pinnata Superba combined with Carex buchananii, testacea and comans Bronze to mimic the colours of the Rebar while one of the most popular borders of the garden contained a dreamy mix of Paeonia Claire de Lune, Sanguisorba and Salvia nemerosa Caradonna.   The excellent quality of the plants themselves was down to the skill and experience of fellow exhibitor, Billy Caruthers of Binny Plants, who supplied the plants.

Carolyn explains, I used the wildflower matting to problem-solve some of the trickier surfaces in the garden and then selected the cultivated plants to mimic the wildflower effect.  Overall, though, it was the meticulous attention to detail and a true sense of team spirit which made this show garden so particularly special.