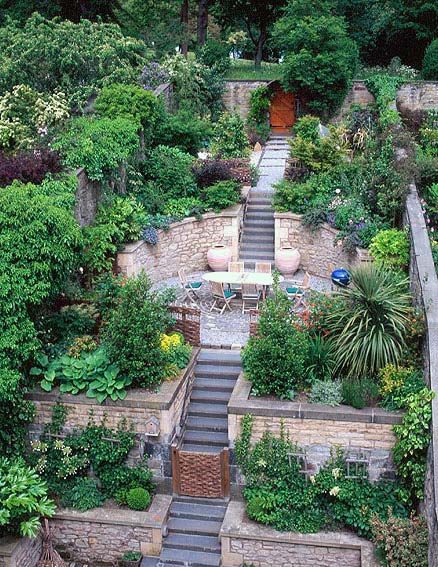 From children’s play areas to an outdoor dining space, this multi-tiered Edinburgh garden has all the bases covered

Under a small arch in an old stone wall in Edinburgh there is a door. It’s exactly the kind of door an adventurous child might hope to stumble across by accident, and it opens into a place that would surely delight whoever was lucky enough to find it. Not for nothing is Carolyn Grohmann’s company called Secret Gardens. Because she has filled the garden in question with hidden corners that encourage flights of fancy in even the most grown-up visitors.

It is a magical spot with something for everyone, from adventurous children to parents in search of a peaceful refuge. But creating it was a massive undertaking. Occupying a 20-metre by 8-metre site, the south-facing garden rises abruptly from the back of the house. This 10m slope had been left to overgrow and was virtually featureless. Enter Carolyn’s determined client.

The mother-of-two’s wishlist included ‘maturity with big specimens’, a flat children’s play area, and an element of wildness. In March 2002, Chris Aitken of Casa Design was already project managing a makeover of the client’s townhouse. Until the completion of the garden four months later, he found himself in charge of its transformation too.

His remit began with interviewing prospective garden designers: “There were three candidates, and Carolyn turned up with a pile of garden magazines to assist the client with visualisation,” he recalls. Carolyn agrees that they hit it off from the start: “If a client professes no expert knowledge, there has to be an element of trust,” she says.

With a number of stylish garden designs from Hertfordshire to the Borders already under her belt (not to mention a doctorate in European history), Carolyn drew up an imaginative plan which covered everything the client had asked for. Given the steep terrain, she settled on a series of distinct sections in a three-tier scheme, which tumbles down from the gate in the wall at the top (leading through to an area of private parkland) to the newly renovated townhouse below.

Level one, accessed directly from the rear of the house, comprises a grassed play area complete with a wigwam made from woven willow. Here, Carolyn has incorporated the first of several subtle references: “This section doesn’t receive much sun so it could get muddy,” she says. “This is solved by cobbling the path – a nod towards the cobbles outside in the street.”

Another visual reference is found on level two. Here, two wisteria-clad willow arbours preside over seats fashioned from church pews, another of which graces the client’s hall back inside the house.

This section of the garden is set aside as an adult comfort zone. A dining table and chairs occupy centre stage on a cobbled circle ringed with gravel to create the focal point of the three raised terraces. “It’s surrounded by big plants, colour and texture,” enthuses Carolyn, who also ensured this area would be filled with delicate fragrance by planting lavenders, roses and honeysuckle.

The uppermost tier is home to fruit trees and grasses which, combined with other references such as the boat converted into a sandpit, an appealing hammock and a collection of shiny pebbles, evoke memories of family seaside holidays. Under an arch in the wall is the door that inspires comparison with the entrane to the magical world of the famous novel The Secret Garden.

The stately exuberance of this garden belies the Herculean effort required to create it. A dedicated taskforce (including Chris, who got hands-on himself) shifted 250 tonnes of bedrock destined for 30 skips. In came 15 tonnes of imported soil; coping stones, slate, granite sets and rubble (a stonemason worked on-site for eight weeks shaping them into the tiers on which the garden is founded); 600 mature shrubs, trees and herbaceous plants; and reels of cables which have been buried underground and are used to power the outdoor lighting system. “Chris and I were problem-solving on the phone every day,” says Carolyn of this mammoth task.

But now the garden’s architecture speaks for itself. It’s a place to be inhabited, not just strolled through. Boldly contrasting leaves create striking patterns and clipped holly towers high enough to lend the garden its secret feel, while climbers scramble up mellow walls. This is urban gardening at its most gracious and magical.