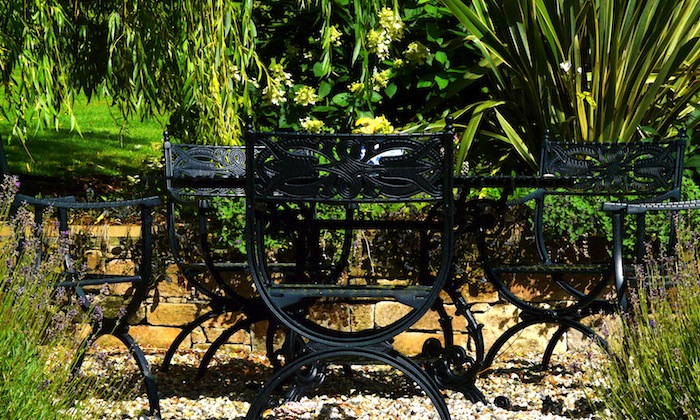 Posted at 12:28h in News, Press by SecretGardensDesign
Share

Four years ago, when Rachel and Graham Bucknall moved to a Georgian house in West Lothian, little had been done to the garden in the previous 15 years. “There were established borders with beautiful azaleas and lovely old tees, but we struggled to even get into the walled garden, as it was so overgrown,” explains Rachel. Outside the back door, in the very place where the couple wanted to have a family garden, there was a driveway, a set of concrete slabs, a concrete summerhouse and some ramshackle kennels. There was also an aluminium greenhouse – “useful but not very attractive” – which blocked the view of the field beyond.

“Having lived in Australia, we enjoyed outside living and realised that this aspect of the house wasn’t working for us,” says Rachel. “We wanted a space hat was flat and sunny, and a good spot for a barbecue.” They also wanted the garden to be entertaining for their three children, Tiffany, 9, Amelia,7, and Lachie, 5.

The couple mulled over the situation for a year and then, on a friend’s recommendation, they called up landscape designer Stephen Ogilvie. He in turn recommended Edinburgh-based garden designer Carolyn Grohmann to draw up the plans. “My original brief was to create a practical informal garden that included an outdoor living area,” says Rachel. “I also wanted a bed for growing herbs and another bed close to the back door, where I could grow flowers to cut for the house.” She wanted the garden to be fun and it also had to include a space for the pizza oven she had ordered for Graham’s birthday.

Carolyn immediately realised that once the summerhouse was removed, a view would be opened up straight out onto the garden. “Only the kitchen and breakfast rooms overlooked the garden, but both rooms are used all the time.” She also suggested that the greenhouse be moved. “Within a week it had been moved piece by piece to a new site.” The shrubs were also cut back and the herbaceous border were revitalised.

Carolyn then produced a design for a flat terrace, with wooden surrounds laid with Caithness stone, leading from a courtyard with box-lined parterres. Further up the garden, a sunny gravel patio surrounded with a lavender hedge has replaced the greenhouse. Following the formal lines of the house, the design included a water feature decorated with floating silver balls on Perspex tubes. Edged with hardwood decking, the water feature doubles as a paddling pool and has provided hours of entertainment. To make it even more fun, the children’s initials were carved in pebbles by Jane Raven and placed in the water, Carolyn also incorporated a willow wigwam, which sits in the herbaceous border.

Rachel’s request for a cutting bed close to the back door – which is dominated in spring by a pink-flowering Crataegus laevigata ‘Rosea Flora Pleno’ – resulted in an allium bed, where white tulips kick off the season, followed by alliums and lilies. “Last summer we planted white cosmos, which produced a great white bed and plenty of flowers to pick,” says Rachel.

Choosing the best site for the water feature proved tricky, as there was a group of mature trees at the side of the house. It was time to throw out the rule book.

“On paper, it was a major mistake to put a patio under the huge trees at the side of the house – no less to stick a water feature there,” says Carolyn. “However, the patio is in exactly the right place to get the evening sun, and it is sheltered from the wind. It is also a shady place for family lunches.” The risk paid off, as the site has proved easily accessible to everyone. The water feature does tend to get clogged up with leaves in the autumn, but a solution is in the pipeline.

Following on from the success of the small garden, a pond was laid out by Nick Benge of Water Gems further up the hill to attract wildlife. Keen to expand further, Rachel is now thinking about the walled garden, which at present houses a happy menagerie of livestock. There is a donkey called Christopher, a small flock of sheep, a saddleback pig and her piglets, and some hens.

Rachel and Graham now own and run the Bridge Inn, Ratho and the Ship Inn, Elie.